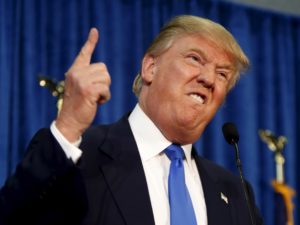 January 31, 2017 Posted in VPN Media by Australian VPN • No Comments

The 45th President of the United States, Donald Trump’s campaign involved devious slander and personal targeting of everyone from Democratic representative Hillary Clinton to Ted Cruz. Trump’s latest target is the innocuous computer.

Trump questioned the gathering at his New Year’s Eve party, the reporters specifically, asking them if they consider computer networks safe. He vocalized his concerns on the state of cyber security of all computers including the critical ones. Cyber-security experts are now alarmed because the comment can potentially shake the trust citizens have in the government.

The comment on computer security came as an answer to Trump’s view on alleged Russian hacking. He was quoted saying that hacking is an issue which is hard to prove. According to Trump, the only measure to ensure exclusivity and privacy of information is by dealing with interactions the old school way- hand written couriers. Trump believes that if there are unnecessary complications in personal interactions, it is because of computers and the progress made by digitization. Globalization has erased geographical barriers at the cost of personal interactions.

U.S and its views on Cyber Security

Post the 9/11 tragedy, Former President George Bush encouraged the evolution of a comprehensive national cyber security policy. Since then, it has been the Federal Government’s top priority to preserve the integrity of the private and public computer networks which fuel the functioning of modern society and commerce.

During his campaign, Trump emphasized that the need of the hour is to build stronger security walls (literal and figurative) to protect the state and its citizens from cyber-attacks.

The former Defense Department policy adviser Michael Sulmeyer, revealed that the earliest effort made by Trump in September in the course of the presidential debate was a dig at the allegations of interference from the Russians.

Post the swearing in ceremony, the speculations on the possible involvement of the Russian hacking in his win has only grown louder. U.S intelligence community unitedly believed that Russia was actively engaged in the effort of state sponsored hacking. The hacking raises two important questions: Is broader cyber security that feeble and reliable?

The latest comment from President Trump could lead to a possible recalibration in the state of cyber-security policy which could potentially deviated from the balance between innovation and security policies supported by former presidents Obama and Bush.

Meta tag: Trump states that no computer is safe