Welcome to our Private Internet Access review, where we have a look at one of the top offerings in the VPN line.

A VPN is a service that improves internet security and allows you to bypass censorship other Internet restrictions, by creating an encrypted connection between your computer and the VPN server. Read here (http://www.australianvpn.com.au/what-is-a-vpn/) for more information on what a VPN is and what it can do for you. 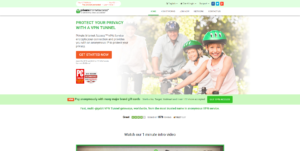 Their prices are firmly on the cheap end of the spectrum, with a monthly bill running you US$6.95, a six-monthly bill costing you US$35.95 every six months (that’s only US$5.99/month) and an annual billing option which will run you a measly US$35.99 once a year (Only US$3.33/month, which is frankly ridiculously cheap). Remember that your bill may fluctuate because of the exchange rate, as the prices are quoted on the website in US dollars.

For this price, they offer five simultaneous connections, which is pretty top-tier right there, only beaten by NordVPN’s six devices and way ahead of the rest of the pack who average out at two or three.

They also include unlimited bandwidth, support for P2P and VoIP (Voice-over-IP), and a positively draconian zero-logging policy. They do not keep logs of traffic, DNS, or session data, which should make the security-conscious among you happy. Since they do not filter, monitor, throttle or log user activity, they also quite pointedly mention that they can’t know if you are using Bittorrent or similar protocols, which is nice if you are planning to use the service for torrenting.

Private Internet Access offers apps for Windows, Mac, and Linux, all with a pleasingly minimalist design. Getting set up was as simple as installing, opening, and logging in, and the apps are not resource hogs like some other VPN apps we could name. The flaw in the minimalism came into play when errors occurred and it was almost impossible to find out what error, or why.

Basically, bar a few hassles here and there – the fact that you can’t access Netflix via them anymore and they don’t seem to be working to change that, and the fact that troubleshooting is almost impossible due to the lack of error messages – Private Internet Access is definitely among the best of the services we’ve reviewed.

We hope you enjoyed our Private Internet Access review. Comments, questions, concerns? Leave a note in the comments.

If you are in the market for a VPN that logs ZERO data, then PIA could be exactly what you are looking for. Great for users who want to download Torrents with complete anonymity!