Welcome to our VyprVPN review – Today, we are reviewing Golden Frog’s VyprVPN, a feature-rich VPN service ideal for the average user.

Almost everyone who uses a computer regularly is aware that they need antivirus and similar tools to protect their computer online. Not as many, however, know that they may also need a Virtual Private Network, or VPN, to protect their data and identity online. A VPN creates a secure tunnel between the user’s computer and the provider’s server, making it virtually impossible for anyone outside the network to see what the user is doing online. Read here (http://www.australianvpn.com.au/what-is-a-vpn/) for more information about VPNs. 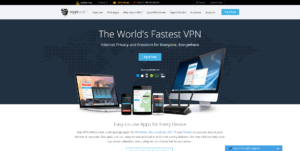 Of course, there is one main problem for Australians with using a VPN. First you connect to the VPN server, which is usually hosted in some benighted third-world country, and then the VPN connects to the site or service you are actually trying to visit. Your data is secure, but your browsing speed has dropped to dial-up levels. For most people and with most services, the security just isn’t worth the hassle. Not so with VyprVPN, which has three servers right here in Australia, so that the increase in loading times and ping is truly negligible. They also have servers in 50 other countries across five continents, which means that your speed shouldn’t change even if you are travelling.

Their services are excellently priced compared to their competitors, and they offer a lot of bang for your buck, such as their proprietary Chameleon system, which is designed to bypass VPN-blocking technology and is included in every package, and the VyprDNS service for increased Internet security. They also offer a three-day free trial. The services are billed in US dollars, which means that there might be a slight fluctuation in the monthly bill.

VyprVPN has a series of sleek and well-designed apps for a variety of OSs including Windows, Mac, and iOS. The Android app is good-looking and responsive, and allows you to set VPN behaviour on a per-app basis, which is a very convenient feature. The Windows app, while not quite as pretty as the Android version, is still very responsive and has a few really nice features such as Kill Switch, which automatically blocks all network traffic when VyprVPN is not enabled. This is an optional feature, by the way, and will not break your Internet if you want to disable VyprVPN for a while when Kill Switch is not enabled.

Some of VyprVPN’s features include:

VyprDNS. While most Internet users rely on their ISP’s DNS servers or a third-party DNS service, VyprVPN users have access to the VyprDNS service, a zero-knowledge DNS service which protects against man-in-the-middle attacks and bypasses DNS filtering without logging a single thing about your web traffic. This allows you to browse the Internet safely and securely without worrying about ads, censorship, or filtering. VyprDNS is automatically activated when you use VyprVPN.

All things considered, VyprVPN is an excellent choice for the security-conscious Internet user who doesn’t want to put up with connection speeds straight out of the Stone Age or give unscrupulous strangers access to their data. The few cons, such as the unpredictable price with the exchange rate and the slightly-less-than-elegant appearance of the Windows app, are minor compared to the rich features and convenience the service offers.

Thanks for reading our VyprVPN review, if you have any questions please comment below!

The software isn’t the best looking thing going around, but VyprVPN provides it’s customers with a great experience, privacy, and an excellent price.